I am sincerely devastated.

The Goodies meant so much to me – these three surreal comics, masters of rapid-fire gags, physical slapstick visual comedy, anarchic social and political commentary and the ancient martial art Ecky-Thump (which involved bludgeoning your opponent with a black pudding) practically brought me up in the ‘70s.

The Goodies shaped my sense of humour, as they did with many, many others. They gave me a different, wider, more insightful appreciation of comedy. Even today, at least 45 years after I first saw them, I feel they were so very important to my young life. I feel, even now, that I know them.

I was too young to see Monty Python, which started a little before The Goodies. I caught up with it later on video, but even that iconic show didn’t capture the hearts and minds of Australian viewers in the same way The Goodies did. Who knows how many times The Goodies were repeated on the ABC (and later, on UK.TV through Foxtel) It was enough for me to still, decades later, be able to recite swathes of the scripts verbatim. 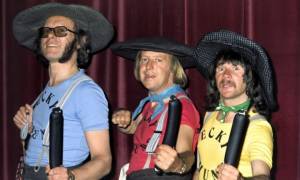 Even after my high school years, if I was going on holiday or working later I would have Mum video tape repeats of the show off the TV. I ended up with most of them on VCR tapes that I all but wore out replaying over and over. I’ve since bought the entire DVD collection and it remains on solidly regular rotation in my house.

Anyone of my vintage will recall seeing the giant Kitten Kong topple the Post Office Tower while The Goodies, dressed as mice, riding a trandem bicycle held aloft by balloons, try to syringe it to return it to normal cat size. On paper it sounds mental. On film it won the 1972 Silver Rose at Montreaux’s Rose d’Or Festival! The Movies episode pays homage to, well, the movies, with the trio recreating some classic film tropes, including Buster Keaton’s legendary building façade falling around him scene. Every episode they made was so cram-packed with gags that repeated viewings were almost essential to get them all.

I will forever remember Tim being dragged through a park by a cat on a lead in one of the most perfect examples of the trio’s canny approach to comedy. Never afraid to be physical, nor to try innovative techniques for the time, even their less-inspired, shoddier looking effects were campy and enthusiastic enough to garner a laugh.

One of Brooke-Taylor’s most inspired moments was as a Margaret Thatcher/Eva Peron politician (he was never afraid to don drag and it always provided a welcome sidestep from his normal on-screen character as the slightly pompous right wing royalist) parodying Evita by serenading two checkout chicks. “Don’t cry for me, Marge & Tina.” I can’t think of anyone who popularised the Union Jack waistcoat in such iconic fashion – not even Pete Townshend and The Who. No-one could do such inspired rants as him, over a backing tape of Land Of Hope and Glory. Inspired stuff.

Brooke-Taylor came along for the ride as Bill Oddie and The Goodies became pop stars with Top 40 hit The Funky Gibbon, and made a memorable appearance on one episode singing – ever so slightly awkwardly – Wild Thing. “Come on and hold me…. TIGHT… not… quite… THAT tight!  Oh yes, I love YOU!”

Post-Goodies, he enjoyed a long career on radio show I’m Sorry I Haven’t A Clue for almost half a century, and I had the pleasure of seeing Tim live on stage twice, I think, on The Goodies tours of Australia.

The Goodies remains one of the select and very special things that bonded my Dad and my little sis and I. Last night it felt like one of the family had died. It puts this global Covid-19 crisis into stark relief when someone with whom we felt an almost spiritual connection becomes a casualty. With the greatest respect to all those who have lost loved ones over the past few months, until last night the numbers were just numbers. Now it feels personal.

Lady Boomboom and I watched a few episodes of The Goodies last night, revelling in their collective and individual brilliance. Radio Goodies, Kitten Kong and The Movies all got an airing. Today we’ll watch some more. Perhaps Bunfight At The OK Tearooms, Goodies & The Beanstalk, and The Clown Virus. There are dozens of classics to choose from.

Tim Brooke-Taylor OBE was 79 when he died of complications from Covid-19, just three months shy of his eightieth birthday. He leaves behind his wife of 52 years, Christine, two sons and extended family, and a legion of devastated fans and admirers.

Thankyou for all the laughs, TBT. Rock in Peace.

We use cookies on our website to give you the most relevant experience by remembering your preferences and repeat visits. By clicking “Accept”, you consent to the use of ALL the cookies.
Cookie settingsACCEPT
Manage consent

This website uses cookies to improve your experience while you navigate through the website. Out of these, the cookies that are categorized as necessary are stored on your browser as they are essential for the working of basic functionalities of the website. We also use third-party cookies that help us analyze and understand how you use this website. These cookies will be stored in your browser only with your consent. You also have the option to opt-out of these cookies. But opting out of some of these cookies may affect your browsing experience.
Necessary Always Enabled
Necessary cookies are absolutely essential for the website to function properly. These cookies ensure basic functionalities and security features of the website, anonymously.
Functional
Functional cookies help to perform certain functionalities like sharing the content of the website on social media platforms, collect feedbacks, and other third-party features.
Performance
Performance cookies are used to understand and analyze the key performance indexes of the website which helps in delivering a better user experience for the visitors.
Analytics
Analytical cookies are used to understand how visitors interact with the website. These cookies help provide information on metrics the number of visitors, bounce rate, traffic source, etc.
Advertisement
Advertisement cookies are used to provide visitors with relevant ads and marketing campaigns. These cookies track visitors across websites and collect information to provide customized ads.
Others
Other uncategorized cookies are those that are being analyzed and have not been classified into a category as yet.
SAVE & ACCEPT